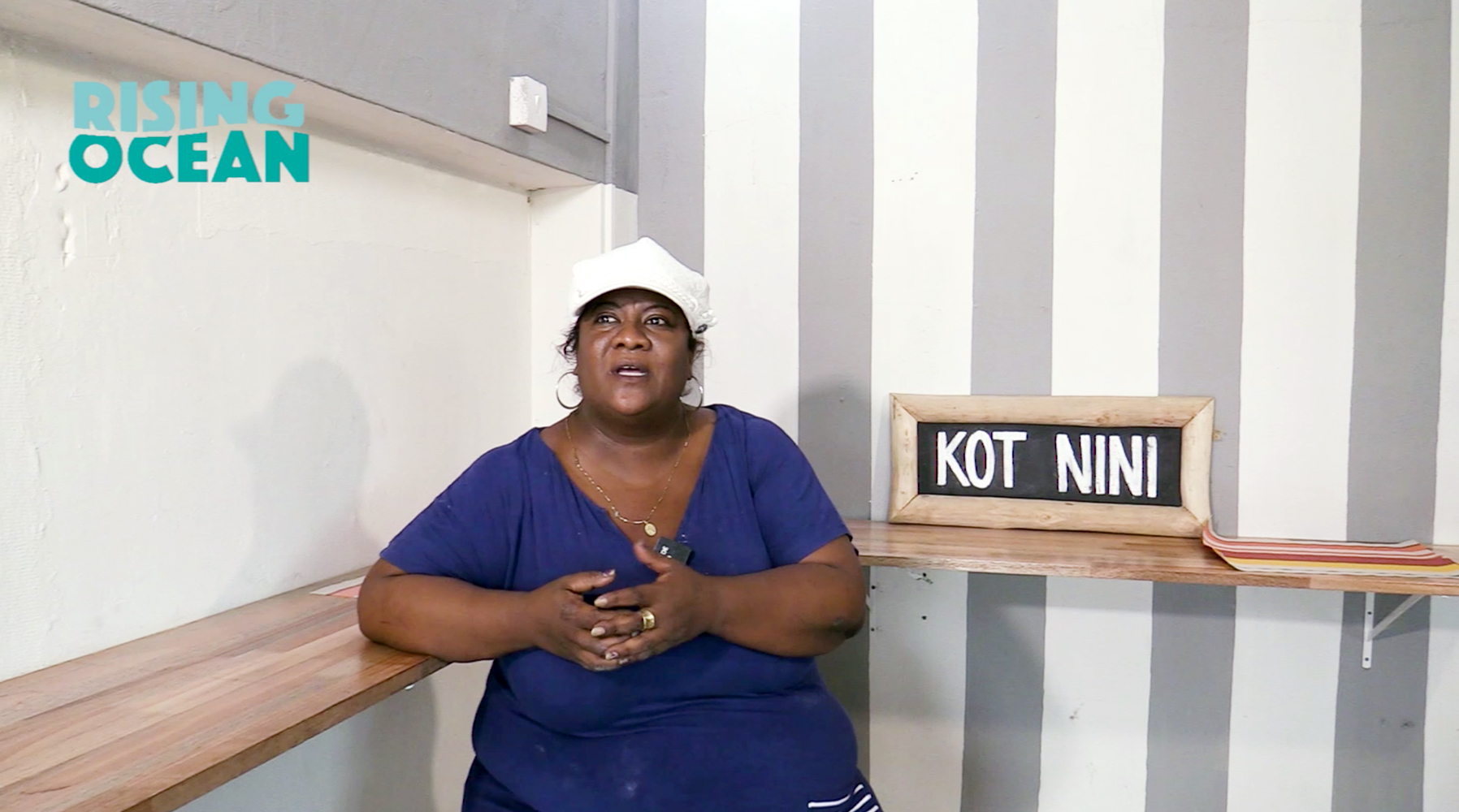 My name is Virgine Parisot, I live in Mahébourg. I’ve grown up in Blue-Bay and aged 45 years old. I am divorced for 12 years and I have a son of 15 years old. I’ve known several areas like secretariat, accounting, I’ve been working in factory, fast food. I’ve been working in call centres for more than 8 years. So today you are in my snack, that’s mine ‘Kot Nini. I am socially engaged. That’s it. I militate for many causes, all that have to do with humans… nature.

What is the history behind?
Why ‘Kot Nini’? All my friends and relatives… By the way why am I named Nini ? Probably you know Natasha Magraja ? Natasha’s elder son that I know since he’s six months old could not say Virginie when he started to speak. It was easier for him to say Nini. Since then this name remained. Each time there’s something he’ll say, ‘mum I am going to Nini’s place’. This have stayed even though today he is 20 years old. So, everyone now has adopted the same and if they are coming for tea it will be tea at Nini’s place. So Nini has created this space and here we are.

What has been the Wakashio’s impact on your activities?
First it has to do with my safety. Second, like I said earlier, I’ve been raised and born in Blue-Bay. The sea means life for me. It is the only place where I am myself. The idea of not being able to enter sea water is a big issue, now seeing what is happening to the marine ecosystem saddens me. With all that have been said, we thought that our lagoon was safe, but it is not the case. That all marine fauna is safe, it is not the case. Seeing that a vessel just accosts our sea for the south-eastern coast to be in extreme misery, is a suffering. We are trying to do everything, but we still see people in destitution. For me it is a shock, it is something that stays with me that I cannot depart from. It is difficult.

Why have you been active in mobilizing on the Mahebourg Waterfront?
I’ve been present because it is my village, my sea. It is about all that takes in nature. It is a human obligation. As a world citizen it is logical. When we’ve seen the concerned authorities not reacting all that time… Rezistans (ek Alternativ) did what was needed to be done and called for help, it was a duty to go and save our lagoon and do what needed to be done. I think it is normal. I did not ask myself any question. There was a call saying that the booms worked, and people needed to come, so I came.

What has this activism brought to your life?
A lot of things. Many people use to say that Mauritians are not united… it is not true. Mauritians have ‘Mauritianism’ within, but it has been put dormant under many things. It was heart-warming, I’ve even cried, when I saw the number of people coming from very far being here with us. It has given me hope. Before Wakashio, I’ve never seen the youth so much mobilized. No one was being paid yet, everyone knew they had a duty and needed to come. Mahébourg is the birthplace of Mauritian civilisation, they came and give all they had. Some are still coming to help out. We cannot thus say that people do not care and that it was only like that before… All people still have that within. It is true that Wakashio was a wrong, but it revealed something tremendous. It has revealed solidarity, Mauritianism and has sensitize many youths on nature’s issue and lot of things that youths need to ponder upon.

Is it easy for women to be engaged in society?
Women give birth, I have nothing against men, but if we look to the majority of things where women are involved there is more positivity. Because women give birth, I believe they have a sensitivity that differs from men. Maybe I am wrong, but out from my living I think it is like that. They pay more attention to certain things and women are more attentive. I’ve made the experience as a commercial where people tend to entrust more women than men. I do not know why, but I think that it is within us. We also have courage that we do not know where it comes from. We do not always know where women draw such courage. Like me, I’ve been struggling since 2016 to open this place, we are in 2020. Women have much patience, calm. Many things that people think that women are unable to do, they actually do it. I believe that the feminism within women brings more sensitivity in regard to nature and family.

What is your dream for our society?
A less materialistic society where nature has a greater place as well as respect for each other, of each individual as a human being. This is important. I dream of a society with no prejudice. It we take for example when a woman stands by herself, many will not see her as a strong woman. They will see her more as a person that want to dominate, this is not the case. Life circumstances can bring a woman to be alone. Maybe she does not want anyone imposing on her. We need to end those prejudices. Some thoughts will say that for a woman to be entrepreneur she certainly has had do that to get that… We need to end this; prejudices refrain many women from moving forward. If a woman works late at night alone, some will say that others will see you and will do that… If we will stop upon all of these… I dream of a society where we should be feeling safe whoever we are, men or women and that valorises and helps more women to move forward. There should be no discrimination in between men and women. As if, as a woman you cannot do more than that, you need to stay where you are… We need to reflect about this kind of society for women.