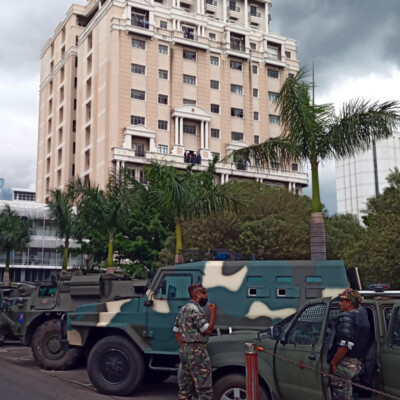 Friday 8th of January 2021. Senior Minister of Commerce Yogida Sawmynaden attends second appearance at the Correctional Court in Port-Louis. He is facing provisional charges in a Private Prosecution lodged against him by Simla Kistnen. The latter is accusing the Minister of falsely declaring her as Constituency clerk and thus supposedly paying her a Rs15,000 salary. She stated that this is not the case and such a situation is being prejudicial to her, especially because this is preventing her from entitled state assistance during lockdown in Mauritius.

However, this affair is taking place in a moment where Simla Kistnen’s late husband has been found dead in Telfair, Moka where Minister Sawmynaden is an elected member, along with actual Prime Minister Pravind Jugnauth and Vice-Prime Minister Leela Devi Dookun-Luchoomun. In the case of Soopramanien Kistnen’s death, police hastily concluded in a suicide before being disowned in court. Undoubtfully, Soopramien Kistnen death being a murder a lot of gray area need to be elucidated now. A panel of pro-bono lawyers has been formed and are actively working on both cases, the one concerning Soopramanien Kistnen’s murder and fictitious employment involving Sawmynaden. Meanwhile, late Soopramanien Kistnen’s diary is being leaked with electoral expenses of elected members of that constituency. It is to be noted that late Soopramanien Kistnen was an electoral agent of ruling party MSM. If the compulsory declaration of candidates for their electoral expenses match legal provision, the Kistnen Papers, as it is known today, are saying the contrary. On the other hand, the probability that late Soopramanien Kistnen had sensitive information on ill-practices and political corruption is becoming more and more evident.

In the meantime, Minister Yogida Sawmynaden case is being called on the Tuesday 12th of January where the question of can a Private Prosection stand on provisional charges will be debated.

Ashok Subron
It is not normal that the Commissioner of Police release a communiqué under a law section with no justification for why police officers can ask people where they are going. For example if one is going to visit a relative or a friend or someone having a function in Port Louis, the Commissioner of Police has given right to police officers to ask those kind of questions. Those kinds of questions are attempt to fundamental rights and freedom of movement of citizens. The communiqué released by Police is under a broad law. He needs to tell us what public security, public order, interior security are under threat… He said none of these. The decision he’s taken is more likely to be politically than safety motivated. So we member of Rezistans ek Alternativ, we are here to make clear that we will not allow any upheaval of fundamental rights. Commissioner of Police had two choices. Putting more efforts in elucidating mysteries around the allegations against Minister Sawminaden about taking public funds to be giving to Ms. Kistnen as Constituency Clerk but that the latter is denying. Seceondly Commissioner of Police should have elucidated what they called suicide at first but that now they are saying foul play in regards of Kistnen death. We need to elucidate this instead of taking liberticide track and making everyone frighten before circulating in our capital. It is our country. The Commissioner should have come on tv. If he is doing this because Mr Sawminaden is being on trial, he should have said so and that he has taken decision in preventing people to go to court. If we are here today it is in defense of fundamental rights and no one should fall into sectarian and dividing trap. Since the beginning on the 11th of July when we demonstrated those traps are being used. So please, no one shall fall into those provocative communal divides. Keep calm, we are here to ensure peace and freedom and that our country breathe freedom.

Narendranath Gopee
As a unionist, I cannot be insensitive to the pain of this country. The country is going through a political crisis with a drift towards dictatorship. It is obvious for everyone. We are in a lawful country and I cannot understand why such a police mobilization to prevent citizens in their routine. You cannot block the road like that. You cannot block Supreme court entry because in a lawful State it is a publicly accessible. Mauritius is for everyone, for you and the population. It is sad to see today police being mobilized like that to protect a thief. There is theft allegations against him… I will not say his name, everyone knows. On the other side prevent the population to express his frustration against all what is happening in this country. It is serious. I congratulate all those people who came here today, who mobilized to create strength… I would like to ask the whole population to mobilize. Do not say ‘let X mobilize and Y stay and watch…’. This will not be good for our population.

Stefan Gua
I think everyone knows by now that we are living serious moments and that we need to stay mobilized. I think that since March 2020 Mauritius has started drifting. We are witnessing the erosion of those rights of all citizens. The t-shirt I am wearing ‘New Mauritius’ has been done during the Wakashio episode. It is saying that when we are witnessing the State totalitarian, authoritarian and unilateral drifting… there is a need for that ‘new Mauritius’. We need to look back at all those legal frames that gives for example too much power to Commissioner of Police. All that we are witnessing shall put us in movement towards that ‘new Mauritius’ so as to avoid that our country the drift totally towards a Police or totalitarian State.