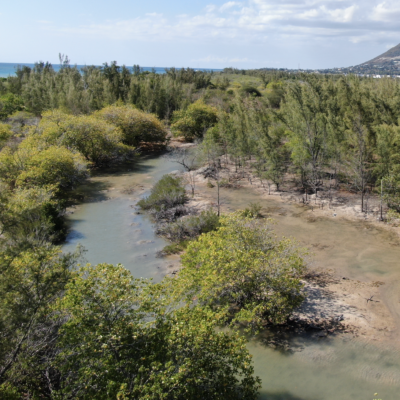 What if Mauritius Judiciary acts upon climate emergency…

In its press conference early October, Rezistans ek Alternativ spoke about the appeal case against the Environment and Land Use Appeal Tribunal ruling (delivered on the 24th of October 2019) before the Supreme Court of Mauritius to be heard on the 18th of October 2021. This case can be a landmark one in Mauritius in regards to recognizing the legitimacy of Mauritian citizens in safeguarding their natural patrimony. Indeed we have witnessed in Mauritius in recent years severe destruction of ecosystems and grabbing of those patrimony. If the Pomponette case where former minister Soodhun ‘de-proclaimed’ a public beach for a now abandoned resort project that aroused a lot of concerns and protest is the most prominent evidence of grabbing, the list of attacks on nature and against people’s interest is quite exhaustive.

Rezistans ek Alternativ which defines itself as an ecosocialist party has been in the midst of major contestation of this ‘nature plunder’ political agenda. If this left wing political party has shown much needed radicality in the defence of the natural patrimony of Mauritius, Rezistans ek Alternativ has also been present in court on that issue. Thus, it is on the 3rd of January 2019 that David Sauvage, Kugan Parapen and Stephan Gua challenged the Environmental Impact Assessment license emitted by the Minister of Environment. If the motivations from ELAT for rejection of the challenge can be interpreted as highly subjectives the bottom of the problem remains the capacity granted to Mauritian citizens to defend their ecosystems. What is termed as ‘locus standi‘ (Oxford : the right or capacity to bring an action or to appear in a court) in judicial term has been constantly undermined by numerous amendments to existing legislations making it quasi impossible for citizens from the Republic of Mauritius to legally protect their natural patrimony. Thus  ELAT has been more busy in recent years deliberating on the issue of ‘personally aggrieved’ rather than the real issue of environmental destruction.

If the appeal case of Rezistans ek Alternativ before the Supreme Court grant the ‘locus standi’ to Sauvage, Parapen and Gua, it will indeed be an important landmark and a precedent that shall open the legal avenue for citizens to stand as custodians of their natural patrimony. This will occur at a moment, as rightfully stated by David Sauvage, where the country needs a paradigm shift in its environmental policies and where the local elites need to seriously question their real estate development model. Not only does this model pose serious threats in weakening the country’s resilience in the face of global warming and all pertaining consequences, it is a model that also widens the gap between rich and poor in regards to the now known impact on the cost of living for locals in gentrification processes. Not to say that Mauritius as a Small Island Developing State found itself on the forefront of serious environmental catastrophe as stated by the latest IPCC report.

As such, the Supreme Court can play an important role as a counter power to legislative, executive and corporate iniquity towards nature and the public’s interest by clearing all doubt over citizen’s capacity in legally defending their natural patrimony. In his intervention David Sauvage mentioned the judgment by the National Green Tribunal in favour of local fishermen against one of the biggest hotel groups in India. In a landmark judgement the group has been directed to pull down buildings and pay one hundred millions rupees for damages to the coastal management authority.

The Supreme Court appeal by Sauvage, Parapen and Gua is due to be heard on the 18th of October 2021. Let us just hope that the Judiciary will push Mauritius in a new era where the notion of nature, ecosystems and environment truly be a public interest affair under public incapacitated scrutiny.