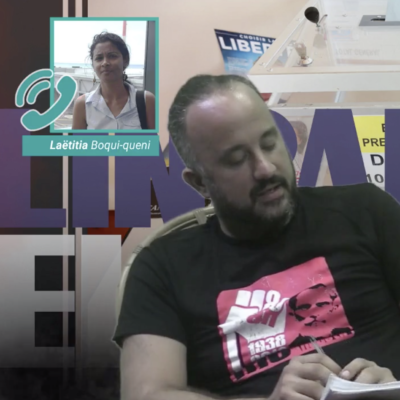 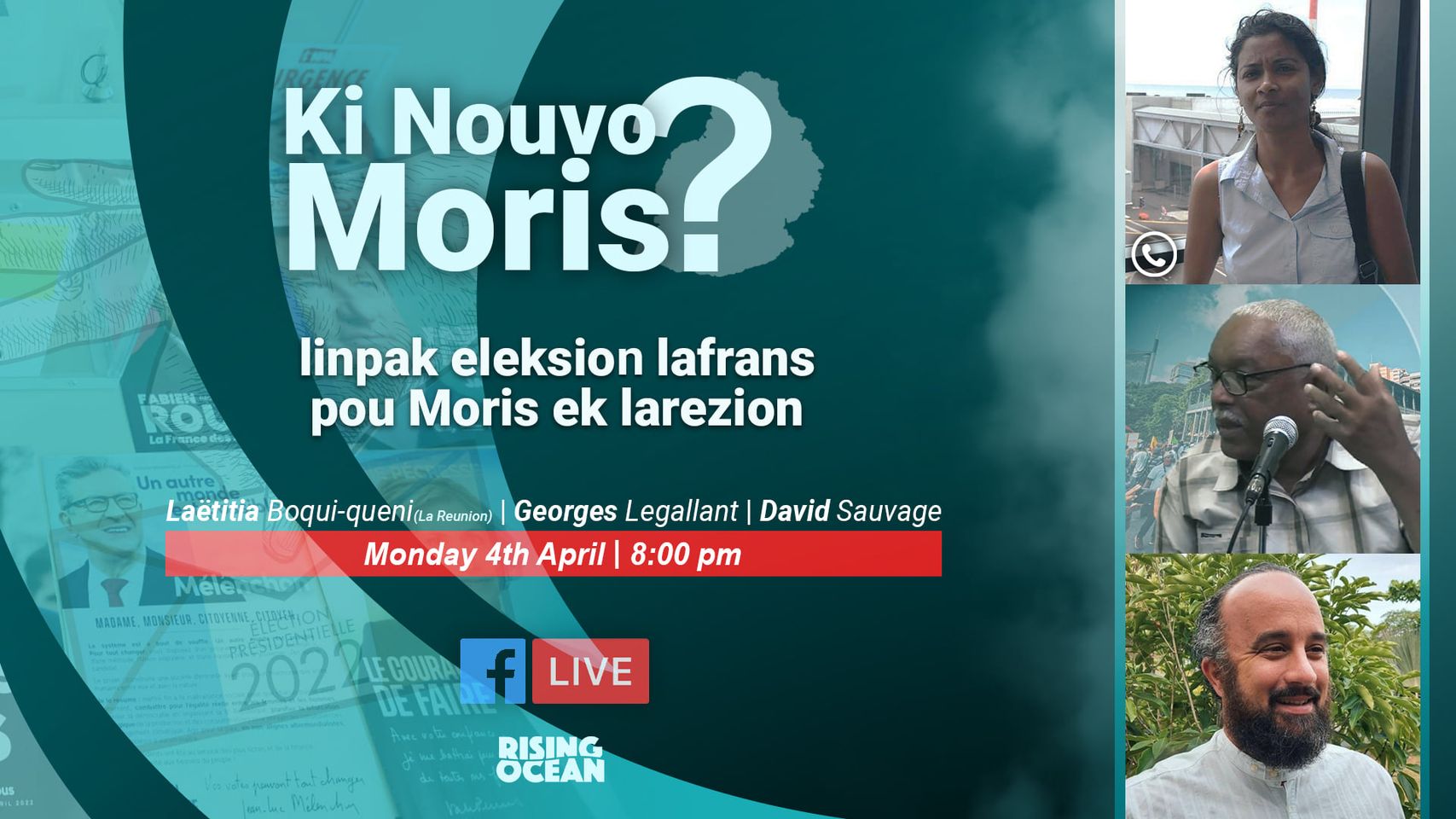 The weekly ‘Ki Nouvo Moris’ of the 11th April 2022 was about the french presidential election. However, the debate was focused about the impact of such an election on Mauritius and the Indian-Ocean. Georges Legallant who presented this emission invited David Sauvage from Rezistans ek Alternativ and Laetitia Boqui-Queni by phone from Reunion island, a France colony in the Indian-Ocean.

Georges started by presenting the result of the election and stated that Mélenchon’s campaign countered what people often say, that ideology in politics no more. Another point as an introduction that Georges underlined was the downfall of traditional parties like the Socialist and the Republican Party, even if he acknowledged the danger of a right wing and far right second round.

David Sauvage started his intervention in saluting Mélenchon’s campaign as being exemplary and courageous in a context where the historical left in France, the Socialist Party has sold out on the left’s ideas and ideologies. Thus, the necessity for the Melenchon’s Union Populaire to re-establish leftists ideals. David also put in context the 25% abstentionism which represents an important part of people deceived by politics and the severe attack of neoliberalism on the whole European left. In further explaining how the presidential election takes place in France, David underlined the attempt in not allowing Mélenchon’s candidacy for that election via the sponsoring system that exists in France. Even though David hinted, with some bitterness, that the victory for passing the first round of Mélenchon’s was close to nothing, he however observed that the dynamics for the legislative election for June in France would be interesting. He argued that all the machinery and mobilisation behind the Union Populaire will be in motion for June.

A disguised right and far right…

Further in the discussion, David observed that Macron is no more than an upgraded mask, in a crumbling moment of old politics, of neoliberal agenda. He pointed out that Macron surfed on the fact that he is young and in that moment of political crisis, the latter stated there is no more left or right. In doing so Macron pretended, as Georges said earlier, that the time of ideologies were over. Macron thus appealed to the depoliticised youth, making them think that he is the incarnation of new and progressive ideas, which in reality has never been the case. For David, during the previous 2017 campaign Macron was only hiding a neoliberal agenda that during his presidency went unveiled and showed fascist characteristics in considering his disdain of the masses. Georges guest went further in saying that Macron’s strategy in final analysis legitimised the far right by minimising Le Pen’s policy in the media and with a politic of dismantling the public services. Such neoliberal politics, for David, impoverished further the middle and working class, and from his point of view, the flakiness of traditional political forces can induce angry people in the far right trap. David stated that Le Pen is tricking the masses when she pretends to defend their interests.

David commented on the votes from the different French colonies, where Mélenchon came out first, that differed from metropolitan France. He pointed to the fact that those territories, specially the islands, are the ones on the forefront of climate deregulation and have specific issues that are linked with France mainland policies. For that David gave the example of the Chlordecone ecological and sanitary scandal in the French Caribbean territories. David is of the opinion that Melenchon’s political program was the most ecological one amongst the contestants and that this would have been a breakthrough if he made it to the second round. For the member from Rezistans ek Alternativ it would have drastically changed the discussions around climate at the COP summit.

David, in response to Georges question on the far right, said that Le Pen has only ‘rebranded’ far right rhetoric and that in no way her ideas differ from what far right has always been. He further said that it is a shame for educated people to vote and defend the far right ideology. This is why he despised the mainstream media in France, specially those under oligarchs control, for allowing Zemmour to spread ‘shaming’ words for over 15 years on their media. David is of the view that it is a common responsibility to repel far right ideologies each time to prevent the youth from getting trapped in those kinds of discourse. He says that those advocating for far right politics have not learned from history and are trapped in conservatism. He later made the allusion to Mauritius with the MSM that is against progress of the society since they have not allowed non-communal candidates to stand for general election in 2019.

On the impact of those elections on the region and Mauritius…

David is of the view that Melenchon’s non election is somehow a missed historical and qualitative rendez-vous from different view point; ecology, self-determination, feminism, economy, politics etc. He said that it would have been interesting for the Indian Ocean and Mauritius, this would have been an echo to the political ideas of Rezistans ek Alternativ since there is a convergence in ideas. He said that both the La France Insoumise and Rezistans ek Alternativ as ecosocialists would have addressed the ecological crisis and reviewed the relationship between France, European Union and the Indian Ocean. He took the fishing agreement between the EU and Mauritius as an example of an ecocide perpetrated by Europe that needed to be questioned and that would have been the case if Mélenchon made it for the election. On the contrary he said that whether it be Macron or Le Pen, it will be the same in terms of post-colonial politics and neoliberal approach of France vis-à-vis the Indian Ocean based on both political visions.

Intervening from Reunion Island Laetitia Boqui-Queni pointed how the result differed in Reunion as compared to France, in Reunion, Mélenchon came first. David added to that saying that this has also been the case for other french colonies, like Guadeloupe. However, Laetitia said that unfortunately, the votes from Reunion are of low weight in deciding nationally. Laetitia pointed out the high abstention of 47% in Reunion as being the fact of a political expression that needs to be understood from the perspective that exists a political vacuum that the presidential election does not fill. She added that now with the right wing and far right contesting for the second round, maybe people will vote for the less evil, or precise further the vacuum expressed during the first round with more abstention. Later Laetitia added that Melenchon’s score in Reunion can be seen as good for the left in the island, since this proves the pertinence of left wing parties in Reunion. However, Laetitia pointed out the contradiction in some other territories where Le Pen came first, like Mayotte.

Commenting on Laetitia’s intervention, David is of the opinion that blank votes should be recognised because they differ from abstentionism and show more a protest character since the voter has fulfilled her/his civilian duty by voting. He said that such an option would probably have taken people to the voting centre although they might have not designed any of the listed candidates as worth it.

David expanded his analysis on different other aspects of this election, he spoke about a permanent mobilisation as a way of collective ownership of political debates and decisions; the conservative vision of ecology embodied by Jadot; ideas that Mélenchon has been able to put forward on economic justice… He concluded his intervention in saying that political participation is not and should not be exclusive. He believes that humans are social and political beings and that the dominant neoliberal ideology has pushed humanity to believe in the advent of society as an individual process and not a collective one. He thus made a plea for people to recognize that progress in society has been the product of struggles that they need to identify and to join with activist movements and forces like Rezistans ek Alternativ that inscribe themselves in social progress.

David Sauvage is a computer engineer and an ecologist and political activist from Rezistans ek Alternativ. He is an ardent defender of open source technology and is mostly known for his contribution to mitigating the Wakashio oil spill in Mauritius in 2020. David is indeed the conceptor of low-tech and cheap booms that were confectionated by thousands of people in Mauritius to counter the oil spill effect.

Laetitia Boqui-Queni is a poet and playwright and left activist from Réunion Island.