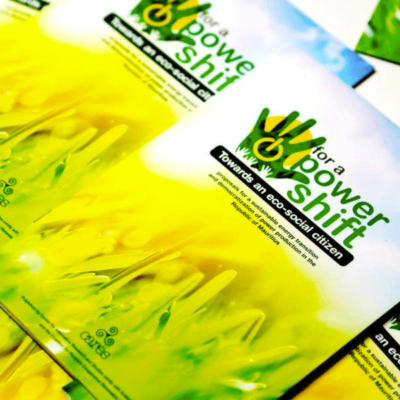 What energy policy should be adopted for making Mauritius a sustainable island ?

Electricity production in Mauritius is coming live again with the announcement of the government to 60% use of renewable energy for the sector by 2030. This is taking place at the same moment where the contracts with major 3 power producers, Alteo, Omnicane and Terragen are coming to term. This situation that is opening the space for new negociation and adjustment has occasionated an open conflict between Terragen and the State of Mauritius.

It is in this context that Rising Ocean organised it’s weekly debate on the issue. The Monday 9 of May 2022, Michel Chiffone an eco-socialist activist, member of People’s Renewable Energy Cooperative and Sunghoon Kreepalloo the president of Small Planters Association were invited to discuss about energy policy respectively. Both are founding members of the People’s Renewable Energy Cooperative created as an alternative to fossil fuel energy production and to the privatisation of energy in Mauritius. Indeed, the cooperative that regroups multiple orgnisations like trade unions, small planters, progressive left orgnisations and the civil society has come up with an alternative vision on a democratized approach to clean energy production. In the debate both, Michel and Kreepalloo acknowledge that there is a stranglehold on decision regarding the energy sector. The debate was hosted by Ashvin Gudday.

State failling to perform its function…

Michel Chiffonne started by laying emphasis on the fact that during this last 20 years, questions about energy policies were concentrated in the hands of sugar oligarchs. He claims that electricity which was initially a basic utility has been transformed into a commodity by those in power in order to make profit for what is known as Independent Power Producers (IPPs). Indeed Chiffonne explained how in this neoliberal society the energy sector plays an important role in shaping political campaigns. He truly believes that these IPPs are given contract in exchange of favor ; supporting electoral campaigns of the pro-neoliberal political parties. As such Michel claims that the State has failed in his function since during these two decades none of the parties who were in power have manage to rectify the situation.

Chiffone highlights the fact that those who control the energy sector controls the political system also. These big corporations applied pressure upon the politicians and government itself to maintain a corporate stranglehold on the energy sector in Mauritius. He acknowledged that the only way to remain independent from these big corporates is to take back the sovereignty and production of energy. The activist also advocates for transparency concerning contracts allocated to these companies and make a call to action in order to make these contracts public.

On the same wavelength, Kreepalloo Sunghoon believes that some sectors such as the energy, agriculture and education should remain totally independent from corporate capture. He claims that the monopoly of power excercise by the economic elite should end up. Kreepalloo argues that responsibility should be taken by both politicians and citizens because both have shared responsibilities.

« Mauritius citizen should have raised their voices and opposed some policies. »

The later also suggested that each political party should come with a long term action plan of at least 50 years for a permanent vision of the State.

Michel Chiffone and Kreepalloo Sunghoon propose that the population also produces energy which will enable both planters and citizens to be independent from industries. They claim that the sovereignty and production of energy can create the condition to produce healthy food safety in the model proposed in the People’s Renewable Energy Cooperative. They strongly believe that this power shift will contribute in the revolution of energy and food production since it can bring food sufficiently for Mauritius and thus cut the dependency on importation.

The main objective of this power shift is to promote renewable and sustainable development for the well-being of Mauritians citizens. Michel Chiffone acknowledged that a transition should be made by the Central Electricity Board(CEB) in order to gear the latter’s orientation towards clean energy. The alternative he proposed to achieve this results is solar, wind and wave energy.

As a result, the representative of the Small Planters Association Kreepalloo Sunghoon spokes on the fact that the democratization of the production of energy will benefits small planters as well as the entire population. He strongly believes that this revolution will enable small planters to remain independent from big industries. Both activists speak on how the State has failed in his mission by not saveguarding the country and Nation’s interest. They acknowledge that there is still a long way to go in order to promote green energy. However Michel chiffonne conclude his intervention by saying that everyone should develop their critical thinking, and that this different way of thinking will bring changes in the society itself.