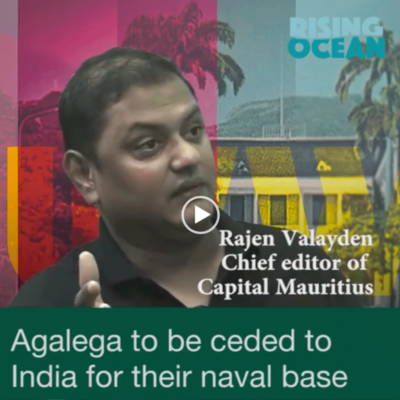 What is Power and who is pulling the strings? 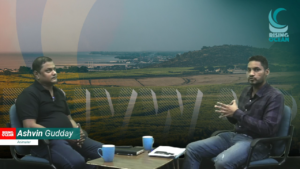 Power has always been a matter of national interest and knowing who truly pulls the strings has always been a mystery. With the sociopolitical and economic turmoil occurring in Mauritius, questions about power control is a recurring topic. It is in this context that Rising Ocean held it’s debate on Monday 30 of May 2022 and invited Rajen Valayden editor in chief of Capital Mauritius, to expatiate about the true meaning of political power. The debate was hosted by Ashvin Gudday.

Although Mauritius’s electoral system has allowed for free and fair elections, the political power has remained in the hands of two main families since independence. Rajen Valayden started his intervention by defining the term power. He defines the term as being the authority given to an individual or a group of individual in order to further the nation’s interest. In his interview ‘Le cocu, c’est vous!’, he gave us an insight of the different aspects of power and those who control it. Rajen recognized that the State Power is made up of three poles; The legislative who is the responsible to make laws and establish the government’s budget, the executive who is vested with the power to execute and enforce laws and finally the judiciary who is responsible for interpreting and applying a country’s law. Rajen highlights that there are no check and balances between the legislative and the executive in Mauritius as a number of those composing the opposition are members of the majority.

Rajen Valayden commented that there are obscure forces acting over the three spheres of the State power. The latter questions whether it is the population who decides or the richest 1%. He claims that despite a population of about 1.3 million people, power is held in the hand of a few oligarchs, and this shows that, contrary to popular belief, individuals do not have control over decision making. Rajen also insisted that participatory democracy, i.e. a system in which citizens participate individually and directly in political decisions is lacking in Mauritius. He believes that the man pulling the string is Pravind Kumar Jagnauth since the Prime Minister plays an important role in law enforcement in as much as the vast majority of executive power is vested in him. He highlighted the need to strengthen participatory democracy such that power is not given to people who do not have the well-being of the population at heart. The journalist qualified this government as pro-communal as divisions along communal lines are increasingly prominent in their politics.

In addition, our guest pointed out that projects such as the Metro Express have been exempted from environmental impact assessment. Indeed, he suggested that assessment should be done to evaluate the feasibility and impact of such construction on the island which he proposed during the ‘Maurice ile durable’ discussions. The government is portrayed as not having long term vision for the country. He explained that ministers need to understand that it is the economy that must be at the service of the population and not on the other way around. In order to develop the different pillars of the economy he proposed a greater involvement of the population. The chief editor of Capital Mauritius claims that there is no meritocracy as certain organization such as the Freemasonry have spread their tentacles over the various institutions of the State.

Rajen also spoke about the influence of oligarchs over political parties. He claims that in 2019 approximately 2 billion of rupees were spent during the election and Rajen wonders where this money came from. He believes that the lobbies of capitalists and the upper-hand they have over the three spheres of the State power; legislative, executive and judiciary is particularly dangerous since this enables to make laws that tend to work in their interests and not in the interests of the working class. The world of work has been profoundly affected by the global pandemic virus. Employers use ‘wage slavery’ to force employees to accept poor working conditions.

Rajen Valayden argues that Mauritius’ success has been based on its neutrality and economic diplomacy. He claims in his conversation with Ashvin that at the top of the State some have subtly tried to replenish their coffers by privatizing services such as the Airport Holding Ltd, the Central Water Authority, the port’s services and the production of energy. In regards of the port’s privatisation he believes that this has happened at least since September 2016 with the meeting between Pravind Jagnauth and Narendra Modi in New Delhi concerning the new marina project whereby the actual Prime Minister was negotiating with Dubai Port world. When returning from India, Pravind Jugnauth received 200 million USD in funding to modernize and upgrade the port’s infrastructures. He truly believes that the merger between the Cargo Handling Corporation Ltd and the Mauritius Ports Authority has as ultimate aim the privatization of ports. Rajen also highlighted the hypocrisy of the press, the government and politicians because of the incoherence in their saying..

He argues that between 2011 and 2012 there has been intense pressure to cede Agalega to India for their naval base project and for P 81 aircraft to be kept there. At that time the Navin Ramgoolam government had asked for a legal advice from a former chief justice. The advice was that this will be a danger for Mauritius sovereignty and the project did not go ahead. Our interlocutor has not hesitated in insinuating that the present Prime Minister of Mauritius has committed 2 offences in relation to Agalega:

1) Misleading the parliament and the people of Mauritius;

Rajen concluded by saying that the solution lies in the hand of people and that every individual should participate in governing the nation so as to shift the balance of power. He also proposes a long term vision concerning PME and also the need to provide them with incentives and formations in order to guarantee their survival in the economy.

He said that we are approaching a tipping point and that we need to act now. Sectors such as education, job and energy should be reviewed. Rajen believes that for positive change to occur people need to understand the true meaning of education which will in turn change their beliefs and relations to power.