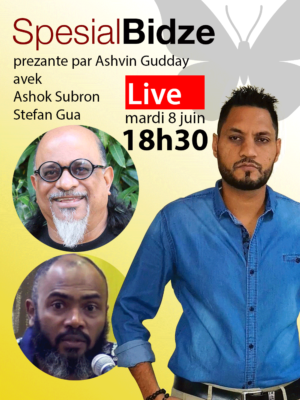 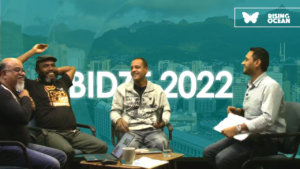 On 7 June 2022, the 3rd national Budget of this government’s mandate was presented by the Minister of Finance, Economic Planning and Development, Renganaden Padayachy since his appointment in 2019. A sum of 172 billion of rupees were allocated for this budget representing a budget deficit of about 4% of GDP as compared to the previous year. Padayachy further claims that the inflation rate given by the central bank of Mauritius will be around 8.6 %. He believes that there will be an improvement in public debt from 97% to 87% since it is believed that Mauritius is becoming economically resilient. Nevertheless the Minister added that factors such as climate change, Covid 19 and the Russia-Ukraine military conflict, are undermining the country’s economic vulnerability. Reflecting for the first time on the budget, members of the Eco-socialist political party Rezistans ek Alternativ (ReA) discussed about the short term and long term measures implications of the budget . The 3 members of the National Committee, Ashok Subron, Michel Chiffonne and Stefan Gua acknowledged that there are immediate actions to be taken in order to relieve the population.

The spokespersons of ReA started by highlighting the 3 principal problems arising in society today; the decline in purchasing power, the impoverishment of the population, and the high cost of living. Some 2 months ago the left-wing party came up with a proposal to relieve the working class. The eco-socialist party demanded the government to lower the price of fuel and to raise the minimum wage to Rs 13,500. Ashok Subron highlighted that he had previously proposed an allowance of Rs 1000 to workers to mitigate the effect of rising prices. If the latter acknowledges that this measure has been implemented he, however, pointed out that with the galloping inflation rate this allowance alone is insufficient. The trade union activist raised a number of question over the 1000 rupees allocation:

“Is it only for one fiscal year?”

“What about the annual salary compensation?”

“What will happen to self employed who are not registered under the “Contribution Sociale Gnéralisée (CSG).?”

Ashok reminded that the measure to replace the National Pension Fund(NPF) and the National Pension Scheme (NPS) by the CSG system was never mentioned in the governments’ electoral manifest . Furthermore, he viewed this uncapped contribution as unfair since on  retirement employees would have received higher benefits with the former pension system.

Concerning transitional measures, Ashok Subron believes that the minister of Finance has failed in his mission. He says that this is the first time in the country’s history since independence that a government is devising measures to sell the country to foreigners. He denounces measure 172 of the budget, stating that it would prevent Mauritians from acquiring land at affordable prices. Due to this measure, Mauritian citizens will have to compete with foreigners to make the acquisition of a plot of land which Subron finds ludicrous. Moreover, he stated that this measure is in contradiction with the food security policy put forward in the budget. Also, he points out that the oligarchs who have been expropriating lands since slavery have as main aim to sell their lands and they have been pushing for the abolishment of restrictions so that they can sell real estate projects of about14 millions or so. The eco-socialist party thus demands the government to put a halt to these projects.

Stefan Gua also recognizes that the current health and economic crisis have enable us to see the limitation of this pro neoliberal government. This global crisis is causing a number of protests and public demonstrations. He believes that this budget should be viewed from different perspectives; political, societal and philosophic so as to understand what the Jugnauths’regime has in mind, Gua strongly believes that this government is not addressing the needs of the population and that it is rather using the population to replenish its coffers. Nowadays people are spending more than they are receiving, as such with the 8.5% inflation rate, the 1000 rupees allocation will not compensate for the higher cost of living. The member of Rezistans ek Alternativ claims that a paradigm shift is necessary. He suggested that it is only a progressive tax system that will bring social cohesion. It is necessary to tax the wealthy and big corporation more which will eventually bring greater equality and social justice. Tax should be levied not only on profits but on dividends as well.

The latter thus argues that the minister of finance is all wrong when he talks about economic growth because the current ecological and economic context is affecting the pillars of the economy not only in Mauritius but at the international level also. As such, talking about an economic boom seems a little bit crazy. Gua also highlighted that Mauritians need to understand that the scheme designed to sell real estate projects to wealthy foreigners is endangering our legacy. Stephan condemned the property development scheme (PDS) and the Integrated Resort Scheme (IRS) which allow real estate projects to be sold to rich foreigners. From his viewpoint, such schemes will inevitably lead to an overall increase in the price of land in Mauritius.

Stefan Gua is questioning the future of cultural sites. Will there be privatization of our cultural heritage? In the same breath, Stephan Gua saw some policies as a regression rather than as a progress. He emphasised that the current government recognizes that we have a serious problem of food security but nevertheless only 3 billion rupees will be invested in food sectors as compared to a budget of 10.9 billion being allocated to the police force. This raises some serious questions. What is more important in the present situation; providing good, healthy and organic food to the population or having a renewed helicopter fleet?

Regarding the energy and food security policies, Michel Chiffone, affirms that nothing significant has been done to address the problem. Michel declares that we have a neo-liberal government and that the budget’s title has nothing to do with the political ideology of this government. It is not a budget for the people, but rather one meant for big corporations and those controlling the means of production. Michel’s points out that for Mauritius to become self-sufficient, the government needs to strive for food and energy sovereignty. Bearing in mind the recent Teragen’ scandal which decided to shut down its thermal power station due to lack of profit, the eco-socialist activist thinks that the government should have come up with measures to accelerate the transition to renewables. He spoke about the people’s cooperative renewable energy society, a cooperative formed in 2013 to challenge privately owned non-renewable energy production. Nevertheless, the measures proposed by the Minister of Finance point towards the privatization of the energy sector. Michel highlights that there is an incoherence. He points out that the government, on the on hand, acknowledges that there is a problem with fossil fuels but on the other hand, leaves the transition to renewable energy in the hand of the private sector.

In addition, Michel Chiffonne explaines that this budget contains no measure to better the situation of fishermen. He adds that we cannot speak about food sovereignty when we continue to grant fishing agreements to large foreign companies to plunder our oceans. Michel claims that government has an unsustainable vision when it comes to the blue economy.

For his part, Kugan Parapen, economist and member of Rea, questioned the growth projection of 8.5 % announced by Padayachy. Kugan declared that this budget has nothing innovative since there is no immediate solution to relieve the population. He highlighted that the question the population is asking; is how the State is going to finance this budget. Kugan finds unacceptable that profit making is more important than the suffering of the nation because with the rising cost of gasoline the government has been able to increase its revenue. As such, he denounces the practice of the State because in times of crisis, many basic commodities have been taxed which has generated large sum of money. The member of ReA thus qualifies this government as having no long term vision for Mauritius especially for the working and middle class individual. He claimed that Mauritius is becoming a tax heaven for rich foreigners. As a result, this is leading to diminishing equality of opportunity and social equity.

Last but not least, Ashok Subron warns workers against the changes in employment laws which at first sight may seem favorable. The spokesman of ReA claims that contrary to previous years, the Minister of Finance will be vested with law making power under the Finance bill. He assumes that the Finance Act will benefit mostly the capitalist class.