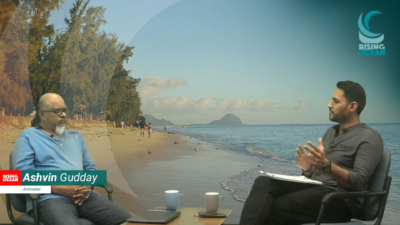 Covid-19, health protocol. What next? 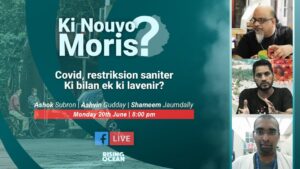 It’s been approximately 2 years and 3 months since we were hit hard by this pandemic and like most other country, Mauritius has not been spared by Covid-19. With the decrease worldwide, in the number of positive covid cases, several questions have been raised, particularly on the lifting of certain restrictions. It is is in this context that Rising Ocean organized its weekly debate. In this week’s broadcast of ‘Ki Nouvo Moris’, Ashok Subron, spokeperson of the left-wing party Rezistans ek Alternativ (ReA) and the virologist Shameem Jaumdally, were invited to take stock of the latest health measures as well as the prospects for the future. The debate was hosted by Ashvin Gudday.

The virologist Shameem Jaumdally started this debate by exposing the different issues arising with the Covid-19 pandemic such as the high number of infections and death as well as the huge impact on the economy worldwide. The latter claims that he prefers to adopt a positive mindset regarding this situation. He strongly believes that scientists and researchers have been working hard to try to reduce the various burdens caused by the Covid-19 pandemic such as the rise in cases of mortality and contamination. In addition, vaccines were developed expeditiously. The virologist claims that this has been possible thanks to an unprecedented combination of political will, global collaboration and good fortune.

The fact that covid-19 is a respiratory virus has caused the it to spread quickly since nowadays people are traveling more frequently around the world.  Measures such as the closure of borders have enabled several countries to be spared. In the same spirit, Mauritius closed its borders for almost 3 months. Shameem claims that most countries have been hit with a second wave of Covid-19. This shows that Covid-19 has shifted to an endemic state since he predicts that the disease will be still be around for quite some time.

In addition, Shameem claims that during the last 20 years, the world has been hit by a number of zoonotic diseases such as the Spanish Flu and Ebola Virus. The scientist claims that this has been caused primarily due to the inherent nature of capitalism. Over the last century there has been massive deforestation and ecosystem destruction by multinational corporations. Deforestation has led many species of animals to cohabit with humans creating the conditions for the spread of deadly pathogens. The latter claims that Mauritius is no exception. During the last 50 years, there has been massive deforestation for agricultural and property development purposes. As a result, animals like bats have been losing their natural habitat and this is why we see them more and more frequently in towns and cities. The virologist Shameem Jaumdally says that Covid-19 has exposed all our weaknesses, and that there are flaws in all our institutions whether political, medical or educational.

Ashok Subron, for his part, highlights how quickly the Covid-19 epidemic has spread around the world. He says that this is unprecedented despite the 1918 Spanish Flu pandemic. Thus, he suggests that in order to understand the propagation and evolution of this pandemic, we must first follow the movement of capital and trades since this pandemic has arisen in the global capitalist era. Since the late twentieth century, capitalist globalization has increasingly adopted the form of interlinked commodity chains controlled by multinational corporations, connecting various production zones, primarily in the Global South, with the apex of world consumption, finance, and accumulation primarily in the Global North. This allows us to perceive how the circuit of capital under late imperialism is tied to the etiology of disease via agribusiness, and how this has generated the COVID-19 pandemic. 1

Moreover, Covid-19 can be said to be the first pandemic in the anthropocentric era and that it is the prevailing economic system which is responsible of such changes in the planet equilibrium. Actions such as deforestation and climate change have altered the biological cycles of the Earth system.

Subron reminds that a zoonotic disease is a highly infectious diseases transmitted from animals to humans. In Ashok’s opinion capitalism has created the conditions for the spread of deadly pathogens. Offshore farming consisting of monocultures of genetically similar domestic animals (eliminating immune firebreaks), including massive hog feedlots and vast poultry farms coupled with rapid deforestation and the chaotic mixing of wild birds and other wildlife with industrial animal production have created the conditions for the proliferation of Zoonotic viruses. Ashok claims that it is important that each and every one understands the origin of the coronavirus in order to prevent the eventual outbreak of other zoonoses. As such, he highlights the importance of exploring the theoretical, historical, and practical dimensions of the capitalism’s alteration of the planetary environment. It is only then that it will be possible to develop the ecological and social resources for a new journey of hope.

In addition, the spokesman of ReA highlights the cruelty of the capitalist system concerning vaccine access in developing countries. For instance, Subron claims that there exists a vaccine inequality as there are some countries where not more than 5 percent of the population have had access to vaccines compared to others where a surplus of vaccines has been recorded. Furthermore, Subron believes that the fact that Covid-19 is happening in the Anthropocene era highlights the dysfunction of the prevailing economic model. As such, he warns about the resurgence of a zoonotic pandemic and he highlights then importance to rethink about a new economic model.

Who suffers the most when there is a health crisis of this magnitude?

Ashok Subron claims that inequality is a global phenomenon. Whether in Mauritius or abroad, it is the people at the bottom of the ladder who have had to bear the burden of this sanitary crisis.  In Mauritius for example, at a certain point in time, people were “forced” to provide their services by working from home.  In addition, the Work Access Permit (WAP) was implemented mostly for manual workers. It can be said that during the pandemic the working class was the one who suffered the most since they were deprived of the most essential and basic necessities. The spokesperson believes that both in Mauritius and internationally, social justice and solidarity was only a myth in this time of hardship. Our interlocutor highlights that it is the feeling of abandonment that has led to uprising in the society, such as manifestations and acts of civil disobedience. The Covid-19 pandemic has exposed the weaknesses in every society and widening and persistent inequality.

As a results, Ashok Subron claims that we must question the role of certain “figures’’ in the society. The Covid-19 pandemic has allowed us to see that people can decide for themselves and don’t need the so-called political leaders or economic elites. During the covid-19 lock down, families were able to survive thanks to women. In his viewpoint, women’s roles should be revalued especially those of housewives. The medical staffs as well as all the work of the so-called front liners must also be revalued.

The virologist, Shameem Jaumdally believes for his part that we must be totally independent from big multinationals. Indeed, he highlights Mauritius’s lack of experts such as virologists and epidemiologist in the wake of this global pandemic. The virologist highlights that the prevailing economic system does not value the work of these professionals.