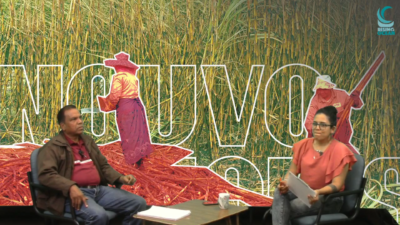 The sugar industry has left an indelible imprint in the history of Mauritius. Slaves and indentured labourers are the ancestors of the present-day Mauritian working class. A historic agreement has just been signed by the Joint Negotiating Panel (JNP) and Terra Ltd. We will recall that unsuccessful negotiations in 2014 led to a nine-day strikes. 8 years later, negotiations have led to a mutual agreement between management and the JNP which guarantees an annual salary increase to match inflation and equal pay between men and women labourers. To mark this historical agreement, the broadcast ‘ki nouvo moris’ had as guest Devanand Ramjuttun, negotiator of the Sugar Industry Labourers Union(SILU), Ashvin Gudday and Sharvin Sunassee from the General Workers Federation(GWF). The debate was hosted by Fanny Rengasamy.

The sugar industry has been the pillar of the economy for many years and it has contributed to the creation of hundred thousands of jobs. Very often it was seasonal since the sugarcane companies only employ people for the harvesting season. With regard to working conditions, Devanand Ramjuttun states that most sugar workers did not receive decent salaries. Years and years of exploitation have allowed sugar bosses to make substantial profits from the work of sugar industry workers. This has allowed sugar bosses to diversify their activities into other sectors such as property development and hotels. However, we should never forget the contribution of sugar cane workers in shaping the economy.

As far as politics is concerned, Ramjuttun strongly believes that the sugar industry has played an important role in the political life of the island. At the time, there were mills in most villages and class consciousness was very strong. Class struggle between sugar oligarchs and the working class often resulted in strikes. We all recall the 1943 where three labourers including Anjalay Coopen were shot dead during the general unrest at Belle Vue Harel. Subsequently, there have been a number of other significant strikes in 1970, 1979 and most recently 2014.

Is the cultivation of sugar cane coming to an end?

Ramjuttun does not share the idea that sugarcane production is going to phase-out as many predicts. It is rather the agricultural land under the cultivation of sugar cane that is become more and more scarce. Nowadays with globalization, agricultural land is being converted to build smart city. Nevertheless, Ramjuttun strongly believes that the Mauritian economy will always need the cane industry since it is the foundation on which the Mauritian economy has been built. At the same time, it is the bagasse collected after crushing sugarcane that our power stations can produce electricity.

Union activist Ashvin Gudday puts forward the idea that all unions must promote participatory democracy in order to be able to advance. Such is the case with the JNP which, according to him, is in constant communication with the workers in the sugar industries. Before each negotiation, the JNP meets all the workers and proceeds to the vote. Nothing is done without the consent of these workers. Regarding the future of employees of this industry, Ashvin Gudday says he is lost because with the competition between other sectors of the economy, people are less and less interested in working in the cane industry. Something he describes as normal since with access to free education people prefer to turn to a less difficult area than sugar manufacturing.

In addition, the union activist says that the cane industry is in full transition, modernization has gained ground over the years. With the arrival of new technology, a decline in the recruitment of workers is deplored especially among laborers and artisans. Certainly there are young people who join this field, but not like before. With regard to veterans operating in the field, the Voluntary Retirement Scheme(VRS) has resulted in premature retirement.

Unquestionably the production of sugar cane is on a decline, however, he hopes that the industry will continue to exists because the employees and the trade unionists will adapt with all the changes that have taken places.

Is the fight successful?

Ashvin Gudday ensures that the fight brought by the JNP bears its fruits. The historic agreement signed with Terra ltd confirms this. With the Covid-19 pandemic, negotiation with employers has become extremely difficult. Especially since the world of employment has been turned upside down in an unprecedented way. Our interlocutor assures that within the JNP, they are trying somehow to improve the working conditions of these workers. Also the workers are also very motivated and have absolute confidence in their union. Historically speaking, the union world in Mauritius has always had an exceptional connection with the sugar industry and despite the decline in production, it remains a pillar of the Mauritian economy that must be protected at all costs.

Sharvin Sunassee for his part says that there is a surprising disparity in terms of working conditions and salaries in the different fields he represents. Despite all the union agreements and effective wage increases, the disparity is still relevant. The trade unionist insists on the fact that the sugar industry still nurtures exploitation. It is especially the workers who are in charge of cutting and loading sugarcane that are the most exploited. Sharvin Sunassee says it’s regrettable that their working hours are not respected, and unfortunately in most cases they are not paid for the overtime they work. Given that the sugar industry is one of the oldest sectors that exists in Mauritius, it is not surprising that it struggles to stay upright with all the competition within the different areas of the economy.