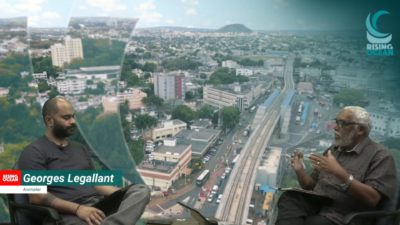 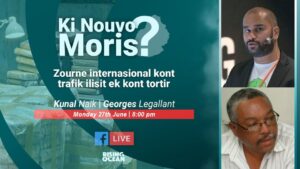 On June 26 2022, the world celebrated the International Day against Drug Abuse and Illicit Trafficking and the International Day in Support of Victims of Torture. Coincidentally, about a month ago torture videos have been circulating on the internet. It is a known fact that drug suspects are those who are most prone to police brutality.

It is in this context that Georges Legallant welcomed Kunal Naik on Monday 27 June 2022. Kunal is a member of the International Drug Policy Consortium, an activist, psychologist and addictionologist who is known for his campaign on drug policy reform.

How does one become addicted?

Kunal Naik started his intervention by laying emphasis on different factors leading to drug addiction. He points out that there are factors such as socialization, physical trauma, family background and peer pressure that can greatly affect a person’s likelihood of drug use and addiction.

The addictionologist claims that there is also what are known as adverse childhood factors that lead to addiction. For example, addiction can be seen as having a fundamental functionality, a protection system used in the softening of psychological wounds. For many drug users, it is a way to temporarily get rid of their past hurts and suffering. The psychologist assumes that it is quite difficult for other individual to understand this part of addiction.

A 2009 study showed that 6000 to 8000 people inject heroin on a daily basis and that approximately 26,000 people are on methadone program. Kunal Naik finds it unacceptable that the distribution of methadone is done in front of police stations compared to when this same program was under the aegis of the ministry of health. The latter tells us that these statistics highlight the fact that almost 1% of the Mauritian population are injectors of drugs.

In addition, the recent study dating from February 2022 shows that there is also a good number of the Mauritian population who consume drugs such as cannabis, synthetic drugs as well as tablets. According to the sample used for this study, we can see that there are approximately between 50,000 to 100,000 of Mauritians who are concerned which represent 10% of the population. The psychologist tells us that there may still be unknown cases since some people from private and public sector are afraid in participating in these survey for fear of being labeled, stigmatized and cast aside in the society. Demographically speaking, we see that there is a rejuvenation in the number of people using drugs. The National Drug Observatory report state that the age group is 11 years to go up.

Where are we with the fight against drugs?

The addictionologist strongly believes that fight against drugs is a total failure whether in Mauritius or abroad. Last week alone, 22 UN agencies signed an agreement that promotes a system of decriminalization of drug use. This agreement imposes administrative sanctions instead of sending drug users to serve prison sentences. For Kunal Naik, the fight against drugs is a resounding failure and if we continue to measure the success of this fight through arrests, we are going straight into a wall.

Moreover, he argues that Americanization has meant that countries that were once tolerant are now in favor of sanctions such as imprisonment and the death penalty. Also, he points out that in the majority of cases, it is drug users who are arrested and rarely those who sell them. For instance, the statistics of the Anti-Drug and Smuggling Unit(ADSU) clearly supports this point of view since out of the 3000 person intercepted with drugs, about 1600 are only consumers and 1400 are small dealers. The latter tells us that there is still a long way to go in respect of big drug dealers.

For the psychologist, prison is not the solution. He tells us that this will accentuate their culture of dependency and thus generate other health problems such as HIV and hepatitis because in prison people who use drugs will still have access to hard drugs. Kunal Naik thus claims that the Support Don’t Punish is a global advocacy campaign calling for drug policies based on health and human right.

In the same breadth, Kunal Naik adds that drug policy should focus on health, well-being, harm reduction and meaningful community engagement. In addition, drug policy budgets need rebalancing to ensure health and harm reduction-based responses are adequately financed. Kunal highlights that the situation in Mauritius is the exact opposite. For example, the budget allocated to the ADSU is substantial compared to that intended to harm reduction. In addition, Kunal believes that the first step to eliminate hard drugs should be the legalisation of Cannabis. He highlights that legalisation does not mean waiving all restrictions. He proposed a prohibition for people under the age of 21 as such as controlling the level of THC which is the main psychoactive constituent that produces high sensation. Kunal Naik strongly believes that this measure could have lower the consumption of hard drugs.

How to make things happen?

Kunal Naik tells us that change will only occur if we place drug policy reform within political agendas at different levels of the society such that resources are allocated to harm reduction.

Kunal acknowledges that legal repression of big traffickers is necessary, however, as far as people who use drug are concerned he believes that measures such as prevention, rehabilitation, treatment and risk reduction need to be implemented. For the latter, this can only be achieved if the State allocate more funds to harm reduction. Also, for a long term change the psychologist advocate for the legalization Cannabis.

Concerning acts of tortures, the psychologist believes that these videos were of extreme barbarism. From his viewpoint, he tells us that not everyone can become a police officer because it is a difficult job with a lot of stress. As a result, he believes that during recruitment process, psychological aptitude tests should be carried out to determine if prospective recruits can really fill these positions.