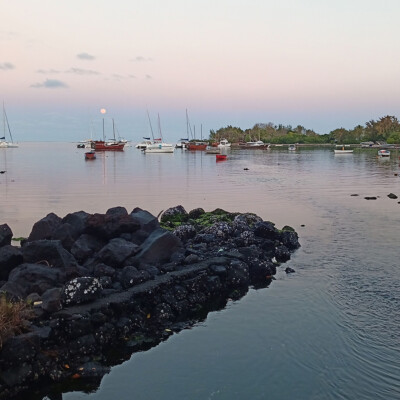 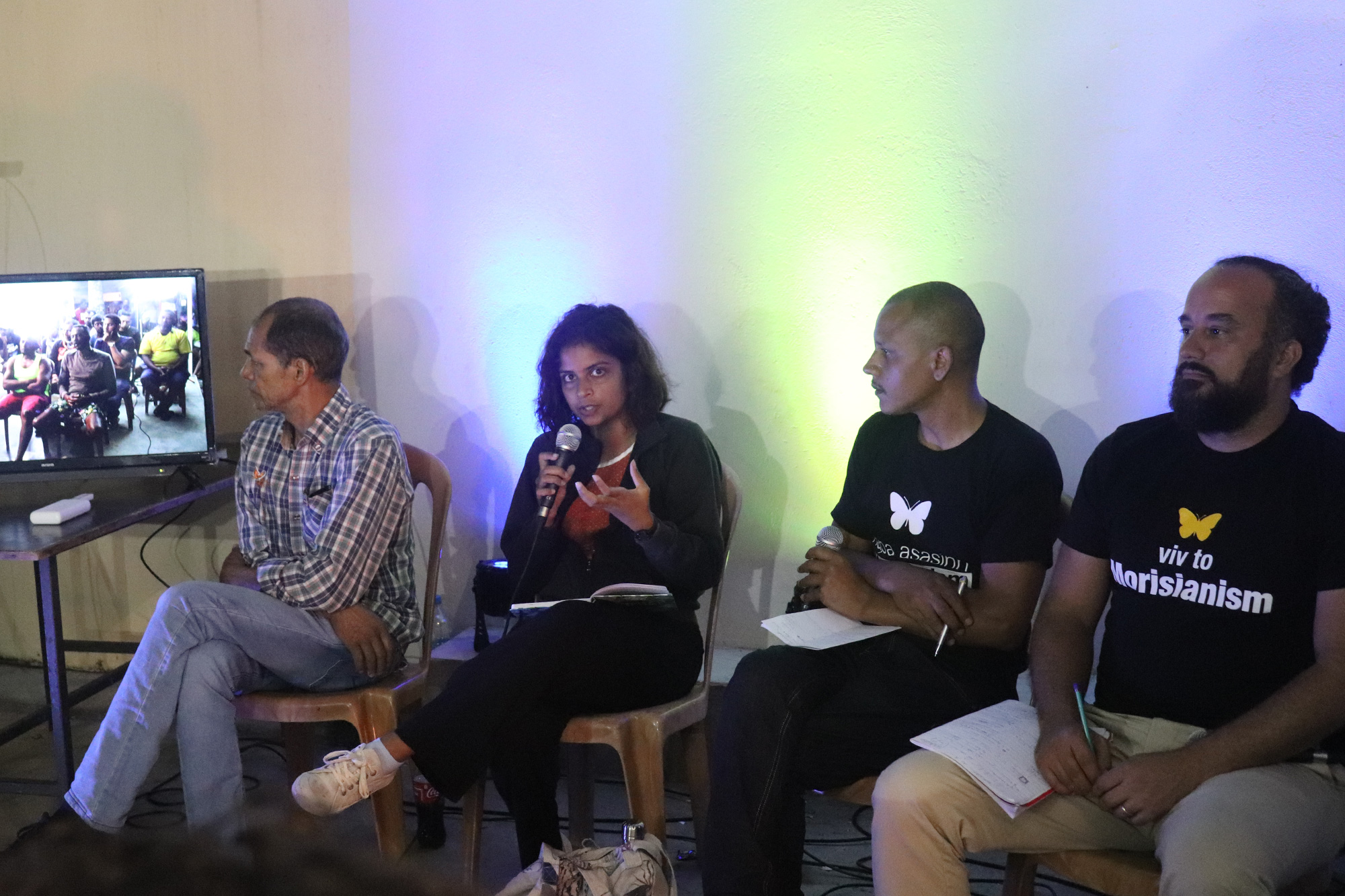 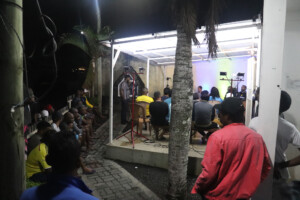 On Monday 12 Oct 2020 Rising Ocean in collaboration with CARES (Centre for Alternative Research & Studies), Rezistans ek Alternativ and Lasanble Solider Mahebourg organized an open-air debate at Club de Débarcadère with the residents of Trou d’eau Douce who have been seriously affected by a dip in economic activities in that region with the outbreak of the Covid 19 pandemic and more recently the Wakashio Crash.

This debate was an opportunity to open up a public reflexion on the growing frustrations of people living in the South East coastal region who are living really dark days with actually quasi zero activities related to tourism or any other activity carried within the lagoon. As if the pandemic wasn’t enough the crash of the Wakashio vessel, provoking a disastrous oil spill, added more misery to the people’s livelihood there. The debate aimed at looking forward to what next? How to imagine an alternative to economic activities for people over there who aspires for a safe future with a descent standard of living.

As an introduction Judex who’s an experienced fisherman expressed his frustration about all the difficulties fishermen are facing today in fishing in the lagoon as fishes are becoming scarce. He talked about the necessity in working off lagoon but that it requires more sophisticated equipment and boats to navigate in high sea. However, he concedes that it is more judicious for fishermen to do so and that this bring a descent return on investment. He explained how he had set a co-operative up with some colleagues on their own to purchase a semi-industrialized boat amounted to millions of rupees to be able to be competitive and survive in the fishing world. Judex raised other issues such as a lack of interest of the authorities to empower existing fishermen or encourage youth to join in this category of job where there’s still enormous potential for a fructuous future with the 2.3 million square km maritime zone for Mauritius. 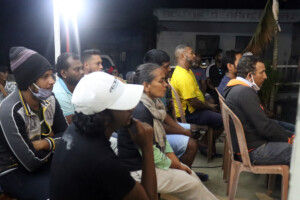 Global warming impact on the ocean

Michel then addressed the question of climate change with its serious impact on marine life upon which Shamma responded. She spoke about global warming which is caused by the long term-term human activity on earth that have altered the climate system observed since the pre-industrial period. She explained that it is due to primarily fossil fuel burning which increases heat-trapping greenhouse gas levels in Earth’s atmosphere thus resulting in a rise in the ocean temperature. Shaama also talked about a warming ocean that causes thermal stress contributing to coral bleaching and infectious diseases. Other phenomenon such as invasive species like the crown thorn starfish that impacts negatively on marine ecosystem and that is the results of a warmer environment. The crown of thorns starfish is a major cause of coral loss after coral bleaching.

David on his part stretched a lot on irresponsible political decisions around the world where priority has been given to huge developments without assessing the negative impact on the environmentally sensitive areas such as coastal & upland marshlands, lakes, inter-tidal mudflats etc. He stressed on the fact that in Mauritius heavy developments have been carried where profit has been the first concern while biodiversity being neglected. Biodiversity which is essential to boost the ecosystem productivity where each species, no matter how small, have an important role to play.

Plastic pollution has also been identified as a major issue which is threatening our lagoons. Everyday approximately 8 million pieces of plastic find their way into our oceans. Judex deplored  that single use plastic for cold drinks, water minerals or even plastic bags & take away boxes can be found in our lagoons. Studies showed that plastics make up to 90% of all marine debris.

Shamma explained how pervasive plastic can be when larger plastic debris degrade into smaller pieces, microplastic and end up into fishes that we eat. Consuming these infected sea foods have multiple harmful effect on health such as cancers, a weakened immune system and reproductive problems among others.

David out cried the fact that manufacturing industries knew well from the start that plastic pollution will be a serious issue one day but still, they preferred to maintain the production without trying to find any sort of alternative to it. He pointed out that nothing was done politically to anticipate the problem. David also raised the point about fertilizers & pesticides that are used sometimes excessively to engross the harvest without realizing that these chemicals may contaminate our water, rivers and ocean again affecting marine life.

The third part of the discussion was focused on fishing agreement that Mauritius has signed thus authorising other countries to fish in our marine territories. In this perspective Judex spoke about by-catch that represents a serious threat to marine life. He talked about industrial fishing by EU vessels where 500 – 600 tons may end up in the seiner’s nets. He felt that more should have been done to allow local fishermen to fish out of lagoon instead of those fishing agreements EU and others. Michel spoke about how shocking it is to trade tuna fish from our region with EU for only Rs 2.25 half a kilo while Mauritians pay some Rs100 for same. He drew the parallel with sugar being produced here and exported while Mauritius imports sugar for local consumption. He also spoke about the value-added seafood hub model that over exploits workers in Mauritius while selling to high end market transformed tuna products.

In the last segment of the debate Michel asked all 3 debaters to propose to focus on alternatives following COVID19 ongoing pandemic and Wakashio oil spill.

Shamma talked about an alternative economic structure that is possible where all is done bearing in mind the necessity in respecting nature and act responsibly. She spoke about creating jobs related to marine activities in training youngsters and develop more educational tools for people to contribute to the protection of our lagoons.

Judex once more emphasised on the necessity of more facilities to be given to local people that earn their living with the ocean. He spoke about the need to encourage the youth to join and bring more dynamism to the noble world of fishing.

David on his part believes that youth must be empowered and given maximum attention as how to reinvent and contribute to the economy of the country. He said that youth showed tremendous potential and solidarity when they came together to fight the ecological disaster of the oil spill. He further added that today the challenge is bigger with a multiple of ecological crisis coming straight on us as invisible Wakashios to crash on our land where the damages won’t only be marine lives but also human. 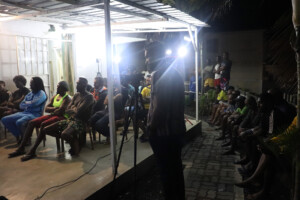 Trou d’Eau Douce people attending the debate contributed much in bringing up local perspectives and realities. Many were shocked about the trading off of our sea and lagoons whilst local fishermen are still struggling in earning a decent living. Michel concluded the debate with a strong claim that authorities should assume their responsibilities. An alternative economic structure is possible he stressed out, if appropriate measures are taken to reinvent and innovate. He went further in saying that we can set up huge boat & vessel constructing agency here itself which can create thousands of jobs like carpenters, welders etc. for our youth.