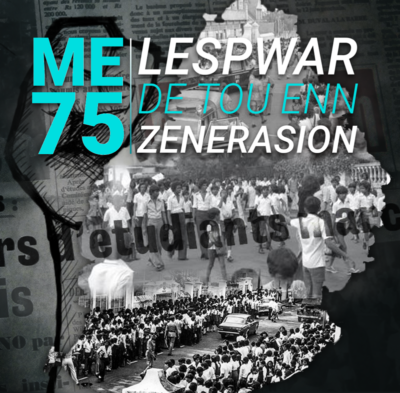 May 1975 – The hope of a whole generation in Mauritius

In this edition of Ki Nouvo Moris, Michel Chiffonne’s guests’ Krishna Luchoomun and Veena Dholah speak about the landmark event of May 1975 in Mauritius. Both of them living witnesses of the insurrection of the young students explain the hope that such a movement aroused among the youth at that time. This led to major political and social advents in Mauritius that unfortunately did not fulfill its expectations leaving thus a whole generation disillusioned for most of them of politics.

Krishna as a visual artist talks on how this event has marked a whole generation. He recalls how as an art student later in the ex-USSR he made an art piece of recollection of this event. Krishna believes in the necessity of safeguarding the memory of such an event because over and above the educational issue, May 75 has been according to him a turning point in terms of social advancement for Mauritius. He is also of the view that a lot of challenges exist today when speaking about education which does not put the accent on a holistic approach and the well-being of the person. For him, art is important for a person and should be a discipline taught at school to every kid to help in awakening people to the world around us.

Veena Dholah from her side speaks about the legacy of May 75 and makes the link between deep debates that were taking place at that moment and that today although some advancement in society, those struggles are still ongoing. She speaks about how women are still oppressed in society though this was a critical point raised by the May 75 movement. She also speaks about the disillusion of the youth in the aftermath of the movement because of the betrayal of many of the leading figures of the movement. She comes back on her rich activist’s past and about her contribution in the recognition of creole as a language.

Both express their faith in the capacity of the youth, though the many challenges, of being in movement and challenge the status quo. They also agree on the fact that the climate and ecological crisis holds the capacity of mobilizing the youth for change. Robbie Hurloll that intervenes trough a video in the live conversation goes in the same sense when saying that the Friday For Future’s movement is one where the youth are engaged and are seriously challenging the existing capitalist model. Other person to intervene is Professor Babita Thannoo who is very critical of the existing educational model that has become purely a commodity in the face of neo-liberalism. The intervention of the historian Jocelyn Chan Low one of the leading figure of May 75 has also been screened. The latter gives a chronology of events leading to May 75. He explains the local and international contexts that has allowed such an intense engagement to occur.