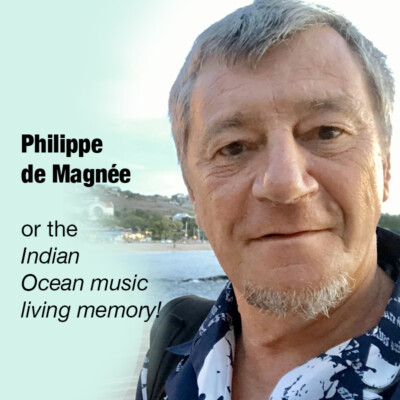 Philippe de Magnée is a Belgian citizen whose faith seems to have been sealed with the islands of the Mascarene. As a sound engineer Philippe has been recording many artists from Mauritius, Réunion and Rodrigues Island since late 70’s but his particularity of that time lies however in the amount of major protest singers that he has been recording. Many of those singers have played primary role in shaping progressive politics of late 70’s in the region at time where a new consciousness build around revolutionary figures such as Che Guevara, Nelson Mandela, Mao Tsé-toung, Frantz Fanon and advents like France May 1968, Vietnam war, the Hippie movement and liberation movement across Africa  were gaining the youth. De Magnée impressive cut lists have taken him to encounter actively politically engaged artists like Bam Cuttayen, Dev Virahsawmy, Zul Ramiah, Grup Lataniers, Grup Kiltirel IDP among others in Mauritius.

In Réunion island as well de Magnée has had a fair share of subversive friction with mythic band like Baster, Ziskakan as few examples. He can surely boast with no modesty of being the one who cut two specific songs that have been the hymn for a whole generation both in Reunion and Mauritius, Bato Fou of Ziskakan and Krapo Krye of Grup Lataniers. This latest song earned him a quasi-deportation from Mauritius. Indeed, this song that speaks about harsh life of working class people with the history of a woman victim of domestic violence from a husband himself subject to social violence in an inequal society, was recorded in 1981. A year where social and political tension were at a peak in Mauritius. Political figures and parties that dominated the political arena for decades were being severely and energetically challenged by the rising Mouvement Militant Mauricien that won a year later unanimously the general election. If Philippe de Magnée stays modest about his role to the major political and social advents of this time, saying preferably that all these were matter of coincidences and that he was only doing his job, history will recall that the latter contribution goes far beyond the historical cuts that he did at that time.

Indeed, De Magnée musical journey in the region has taken him in recording what are no doubt masterpieces of Indian Ocean cultural patrimony. From the Chagossian voice of late Charlesia Alexis, Ton Pat’ from Seychelles, Fanfan from Mauritius, La Troupe de l’Union from Rodrigues, etc., de Magnée has an important collection of published and unpublished works that are listed on his website launched on December 2017. Up to now some 871 artists are listed on www.filoumoris.com. Even until he recently officially announced his retirement, de Magnée was active in cutting important pieces from artists and bands that clearly inscribed themselves as custodians of cultural memory of the region such as Abaim, Daniella Bastien, Marclaine Antoine to name only a few.

Over and above the fascinating work of a passionate, the website put together by de Magnée is an important work that need to be valued for underlining the musical richness of the islands of the Indian Ocean. Never before has such a repertoire been put together and made so easily accessible. Even if de Magnée regrets the non-support of public institutions to this important work, he is not bitter about it, he only fears that all this tremendous amount of work goes into oblivion after him. Critically though, de Magnée work points out the cruel absence of an Indo-Oceanic cultural policy. This should have been one of the missions of the Indian Ocean Commission. This intergovernmental body that regroups Comoros, Madagascar, Reunion, Seychelles and Mauritius that prides itself in defending the specificity of its members should have realized that an important aspect of this specificity is the cultural bond that unites those countries and therefore should have paid much more attention to de Magnée’s work. In the meantime, Philippe de Magnée still continues the work he has started in collecting and listing music from the region and enriching his digital repertoire. With the support of Kreolart of Arno Bazin from Reunion and music collectors who keep on sending him musical treasures. De Magnée in listing those music is actually making them accessible to new generations and saving them from indifference as well.