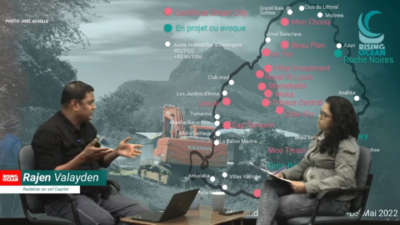 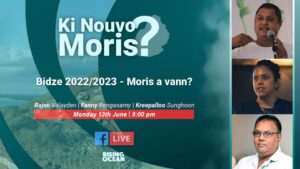 A few days after the 3rd budget of the Minister of Finance, Renganaden Padayachy, it can be said that major societal and economic problems such as; soaring food prices, loss of purchasing power and high fuel tax have not been addressed. Moreover, albeit the financial aid of 1000 rupees intended to households receiving up to 50,000 rupees per month, no immediate measure has been taken to relieve the population. Instead measures to attract wealthy foreigners have been implemented. The very rich are being offered “Mauritian Citizenship’, in exchange for money invested. They are somewhat like a new form of colonizers.

It is in this context that Rising Ocean organized its weekly debate on Monday 13 June 2022. Rajen Valayden the editor-in-chief of Capital and Kreepalloo Sunghoon the President of Small Planters Association, were invited for an in-depth analysis of the proposed budget measures. The debate was hosted by Fanny Rengasamy.

Rajen Valayden recognizes that food sovereignty has been the subject of debate for several years, and that prior to any institutional or governmental reform, we must first reclaim power over the way food is produced, traded and consumed. Rajen believes that any so-called independent country must be able to provide equality of opportunity and equity to all its citizens irrespective of their wealth. From his viewpoint, Mauritius has never been a truly independent country, since life chances are positively correlated with one’s socioeconomic status. The editor-in-chief thus made a plea to fight for a real cause; our independence.

Rajen says that all the so-called real estate development projects stem from a law enacted in 2001 by Paul Beranger, the sugar industry efficiency Act. At the time there was a drop in sugar revenue and this law intended to support the sugar oligarchy. Rajen claims that there has been no real change since independence and that the sugar oligarchs continue to maintain a stranglehold on lands. He believes that the measures contained in the 3rd budget of the Minister of Finance tilt towards the privatization and liberalization of our land to foreigners.

For Rajen, food self-sufficiency and food security can only be achieved if each and every citizen of Mauritius has a fair access to land, finance and access to markets. Rajen highlights the hegemonic role played by big corporations in grabbing lands. He strongly believes that these big corporations dictate political decisions.

For instance, Rajen claims that the job of planter has been devalued on purpose in an attempt not to disrupt the agenda of the sugar oligarchs. He believes that change will occur if there is a change of mindset. Furthermore, he suggests that small planters must benefit from formation and knowledge of experts in order to become entrepreneurs thus contributing in making the agricultural sector an important pillar of the Mauritian’s economy.

In the same breadth, Kreepalloo Sunghoon from the Small Planters Association, claims that every year the government comes up with plans and measures that will never be implemented. Out of all the proposed measures, the latter suggests that only about ¼ of them will be implemented. He referred for example to the land bank project announced in the 2021 budget which was intended to match the demand and supply for land in order to promote food production activities. However, measure *172 of the 2022/2023 budget, defeats this purpose. Kreepalloo says that this shows the governments’ ignorance of the concept of land bank. He assumes that the sugar oligarchs do not have any alternative vision regarding the development of lands.

As such, Sunghoon believes that most of the pro-neo-liberal political parties do not even master certain topics and that a budget is only a masquerade for them. Additionally, he says that the reform of the sugar industry (2006) has resulted in a huge problem. The founding member of the small planter association claims that this has resulted in the abandonment of land by small planters. It is noteworthy that over time, a lot of very fertile agricultural lands have been sold to well-to-do foreigners. For Kreepalloo Sunghoon, our lands should remain in the hands of the population. He advocates for the sovereignty of the property market.

Furthermore, he claims that small planters are underpaid because of the rate based on which sugar is calculated. As such, the money they get does not even cover their cost of production and labor cost. In fact, in 2019 the cost of production of one ton of sugar was RS 25,000, however, in 2022 the price paid to small planters has remained the same. Therefore, Kreepalloo believes that the reason why more and more small planters are abandoning their land is because they are no more profitable. At the moment, there are of about 30,000 plots of lands that have been abandoned and Kreepalloo finds it inadmissible that this scares resource is been neglected.

He firmly believes that this government does not recognized the importance of the agricultural sector in the economy. The latter claims that in the face of the difficult socioeconomic context, we can no longer think about importing our food products. Kreepalloo Sunghoon claims that there has been a decreased in vegetable production, from 220,000 tons to about 80,000 tons per year.

The economist and member of Rezistans ek Alternativ (ReA), Kugan Parapen, claims that this budget has as main objective the liberalization of our property market since a number of measures have been presented to allow wealthy foreigners to acquire property on the island. Kugan reminded that this liberalization has been taking place since 2002 with the implementation of the Integrated Resort Scheme (IRS). The then government came up with the IRS to allow real estate developers the opportunity to build villas that could be sold for millions of dollars to foreigners. Kugan claims that since 2002 there has been a trend whereby each successive government has come up with measures to facilitate real estate acquisition in Mauritius.

After 2002, we had the implementation of the Real Estate Scheme(RES) and in 2015 it was renamed as the Property Development Scheme (PDS). The leftist economist, finds it important to highlight the effect of the establishment of the PDS. The different budgets presented since 2015 show that there has been an important liberalization of our land market and Kugan sees this as a danger. The government does not seem to be aware of the direct and indirect effect of this liberalization on the Mauritian population.