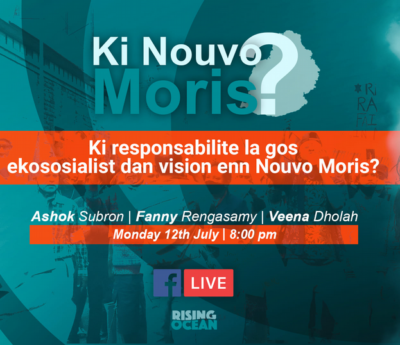 What is the responsibility of the eco-socialist leftists in the vision of a new Mauritius?

Fanny Rengasammy, the host, launched the Ki Nouvo Moris broadcast of 12 July 2021 by reminding us that this Monday evening programme is a production of Rising Ocean and an extension of Lasanble Solider. The theme of that week was the responsibility of eco-socialist leftists in the vision of a new Mauritius and the questioning of a society, of a system that is no longer working and the building of a new Mauritius.

Historical background of the eco-socialist left-wing in Mauritius

Ashok Subron recalled that the Mauritian economy was built on slavery and illustrated the terms « left-wing » and « right-wing », with the example of those who were for and against the abolition of slavery. He then mentioned Indentured Labourers and the period that followed;

Secondly, he spoke about the trade union movement that followed after the birth of the Labour Party, the 1937-1938 dock strike, the emergence of the left and democratic emancipation;

He detailed the left-wing trend of thought that framed social and political emancipation and spoke of the events that marked the post-independence period. He alluded to the birth of the MMM;

Thirdly, he listed the values carried by the movements born in the early 1970s which was about an economy that serves the interest of the masses and not of an elite, among others ;

Veena shared how May 75 has given women courage and taught them to make choices such as how many children they want to have and when they wanted to get married. She explained how with free education, many girls were able to go to school and be literate before leaping into the past to recall her memories of May 75;

For instance, she recalled the celebration of The International Day of Action for Women’s

Health on the 28th of May and deplored that abortion is still a claim in Mauritius. Moreover, she mentioned the struggle and the achievements concerning the recognition of the Mauritian Creole language before enumerating all the progress made through the left-wing women movements; the law against domestic violence, protection orders amongst others but women are still suffering;

Ashok began with the denial of climate change by some heads of state while signs of extreme weather conditions are present in many parts of the world.

He is convinced that it is necessary to recognise in order to be able to act that the model of the economic and social system that was developed under colonisation has undergone “The Great Acceleration” and that we have tipped over into a new era. In addition to this, he spoke of geology, referring to the Holocene and the Anthropocene, as geological period to emphasize that to understand this change, it is necessary to accept that it is a geological and not a sociological change;

The butterfly symbol and climate change

Ashok commented on Rezistans’ deliberate choice of the butterfly emblem in 2014;

He also discussed how environmentalist thinking should have a red and a green dimension to it;

Likewise, Veena later detailed examples of extreme climate conditions around the world and cited Bill Gates and his fake solutions to climate change and the failure of this model.

Ashok suggested that there is a need to review the tourism economic model as we are in a time of crisis where we cannot return back to pre-covid time.

Accordingly, he advised the organisation of a social project and stressed the need for humility because there are many things that we do not necessarily know.

Veena shared that the biggest challenge is that the government does not hear our voices and that despite the signing of several environmental conventions, the « development » model remains unchanged. She listed the places where wetlands are present and spoke about the destruction of the habitat of migratory birds.

She reiterated the importance of preserving life today while many place profit at the expense of life and she referred to the role of women in agriculture;

Veena’s vision of the future

She is quite optimistic about the future when she hears the words of Maryam Sandooyea, a young activist and expressed her will and confidence for commitment. Furthermore, she shed light on the fact that Mauritius should award medals to women and mothers so that the aspect of the care economy is finally recognised and renumerated

Significantly, she underlined the need to build a force for change because she believes that the Government will continue business as usual;

Are we in a transition phase where social justice awareness is emerging?

Ashok reckoned that this is already in motion despite all contradictions and difficulties and made it clear that we are in a unique period of human history with the global health crisis and the looming ecological crisis.

He then detailed the three levels on which the responsibilities of the left-wing lie; the mobilisation based on immediate demands for the survival of the population, the finding of ways to start building and living what we are aiming to achieve and the political project for the country including the debate on a new constitution;

Ashok answered viewer’s question about the actions which will follow if no solutions are found even if the population protest in the streets, by citing the third level he listed above and by inviting all those who want to share ideas about a new constitution to contact Rezistans ek Alternativ.

Georges Legallant on the terms ‘left-wing and right wing’

Georges explained that the terminology « left-wing » dates back to the French revolution as those opposed to the king veto’s privilege sat to the left of the chair in parliament whilst those in favour of the veto privilege sat on its right.

He further claimed that till now this politic position to defend the elite versus the people still exists and this defines a rightwing or leftwing position. He illustrated his words with the case of Covid-19 where only 2 or 3 people sat down to take decisions and the people were not invited to the table. With this in mind, he raised the question of the duty of the left-wing activists;

Likewise, he argued that since there are no left-wing media per se in Mauritius, Rising Ocean is playing a key role. Raising consciousness and forcing the leaders to include our participation in this world are essential parts of the duty of a leftist activist, alongside defending the working class.

Michel explained that the left-wing has a social vision and that Rezistans ek Alternativ follows an eco-socialist trend which opposes capitalism;

He further argued that this affirmation will put emphasis on differentiation and let people see what we are proposing.

He also stressed the importance of not confusing the ideology represented by the left-wing with what Mauritius has had for 50 years. He claimed that although main stream parties bear socialist names, they rule over the country with a right-wing ideology.

Mariam Sandooyea from Fridays for Future

Mariam stated that Fridays for Future movement is not associated with any political party and that they are rather asking for a radical change since we are living in a world where the future is not at all certain.

She added that the responsibility of the leftists is to ensure that the government puts the interest of the people before its own interest and that there is a great lack of transparency on the part of the leaders;

The inclusion of people with disability was also raised by her. The role of the left is to drive the Government to take action. The left-wing must continue to defend values and help society as it can.